If Tech Comm had its own Coachella, how would it be done?

[WARNING: this is a long post, but jam-packed with information!]

Every industry has its own rock stars. Those are the people who have lived, spoken, and written about topics in a particular field. The information and perspective they provide are considered out of this world.

As technical communicators, we are fortunate that we have lots of tech comm rock stars among us.  There are several events that happen over the course of a year that allow several of those rock stars to come to one place to dazzle us with their brilliance, and we are the better for it.

Among the ultimate organizers for such events is Adobe. For the 2013 STC Summit’s “Adobe Day,” they put together a lineup that would make any tech comm groupie squeal with joy to be able to hear some of the leading minds and pacesetters in technical communications. The best part is that, as always, the events are not product sales pitches, but truly a compilation of thought leadership.

For this post, I’m going to start with the panel discussion that was at the end of the event first. The panel discussion wrapped up Adobe Day well,  and I’m using it first as I think it will to help set the tone for the next blog posts about the event. 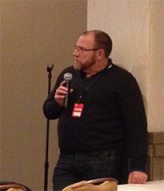 Scott Abel, “The Content Wrangler” asks the panel a question.

Scott Abel, “The Content Wrangler,” served as our trusty moderator for the discussion titled, “The Changing Role of Technical Communication Professionals–Looking at the Decade Ahead.” This was a similar theme to the Lavacon Adobe Day, but with a different set of panelists, the attendees were sure to get a different perspective this time around.

The panelists for this talk included:

Scott started the panel out with the questions, “What do you think will be going on in technical communication in the next 10 years? What are the necessary things for tech comm going forward?”

Kevin Siegel replied first, saying that technical communicators need to learn how to write content so that content can be consumed quickly, as the average attention span of online consumers is about fifteen seconds, and the mobile is the most viable means of getting content out, so think mobile!

Bernard Aschwanden felt that networking was most important going forward. Face-to-face discussions–not social media discussions–with subject matter experts, your audience, and anyone else who is going to consume your content will help you learn what is required for your content. He stressed that ideas and tools are constantly changing, and technical communicators need to be able to adapt. Bernard continued by saying, “No one wants to read what you write.” He emphasized that readers read the output of tech writers because they have to, so tech writers should making information easier to find and easier to read.

Sarah O’Keefe emphasized that the biggest skill gap in technical communication is how content and information is relevant to business. Business needs content because of…why? The most important skills required in Sarah’s eyes bring relevance–like ROI (return on investment)–so technical communicators need to learn how to write business cases for tools and other resources to be able to deliver effective products and outputs.

Ray Gallon agreed with Sarah’s point of view, and also emphasized Bernard’s point about adaptability.  Ray stressed that technical communicators have a unique view, so using that special view plus being adaptable will help technical communications go forward. He believes that software is driving content and making decisions, so we must create it on how software creates things today.

The second question that Scott posed asked, “What is the global impact with tech comm?”

Joe felt that in ten years, technical communicators will still be the same people, but traditional tech comm documentation will be less relevant, and QA (quality assurance testing) of documentation will be more prevalent. He emphasized that by testing the documentation, it allows us to truly understand what part of content is not being used, and what part really matters.  He also agreed with Charles Corfield (more on his talk in a future post) that voice and multi-screen publishing will be important going forward. He stressed that access to multiple devices are needed as you write, especially to test usability and “Google-ability.” He felt that a technical publications department needed at least three smart phones and three tablets for testing content on commonly used mobile devices as emulators don’t work as well. Real devices, including the ones you don’t like, are needed to see how well your content works.

The next question posed was, “Have you had an ‘ah-hah’ moment with things going forward?”

Scott chimed in his own response, saying that he thinks looking at internationalized English is important going forward. He felt that having a controlled vocabulary and other English language standardization will allow content to be created in form of English that machines can understand.

Kevin thinks localization is highly important, backing this claim up with the fact that the most popular article in his company’s weekly newsletter is about localization. He felt that soon enough, we’ll be converting books to other languages more quickly and easily.

Bernard’s “ah-hah” moment was when he realized that people are the key, not products or tools. He felt that typing was dying, and that technology is leap-frogging. He talked about how younger people today commonly connect and communicate without face-to-face person contact, not caring about political correctness and preferring to connect with those who are like-minded. He said, “Teens have few barriers with race, gender or sexual orientation. We must get over our own barriers to address needs of future consumers.” He emphasized that people are needed in order to work collectively, we need to be able to connect effectively with people.

Sarah’s “ah-hah” realization involves the “rise of the machine” and the machine integration of content.

Ray concurred with Sarah, pointing to Google Glass as an example, declaring that Google Glass is the “caveman” version of the next generation of machines that technical communicators with encounter.

Joe’s “ah-hah” was understanding that mobile apps are not interested in being help documentation. Instead, mobile apps involve how to have product integrated in everyday use.

At this point, the floor was opened to attendees who had questions. The first audience question asked if technical communicators need to be the drivers of change and adaptability. Ray answered for the entire panel with a resounding, “YES!”

The next question asked if there was any empirical data to back up the statements made in this panel discussion. Sarah answered that that her responses were derived from the anecdotal data from client requests. Joe said he based his responses on the QA testing done  he’s done over time, and stressed knowing one’s audience. Bernard agreed with both these responses.

Ray felt that content is permeable and will get more so over time. Various departments will disappear due to unified content strategy; things will get blurred and content will get unified, so tech comm will be an integral part of teams.

Bernard reminded us that, “We must get to know the ‘language’ of our audience in order to stay relevant.” Scott reiterated that idea, stating that globalization is going to be really key going forward, which will affect ROI.

Joe had the last word, stressing that how we present what we do is going to make a difference!

As you can see, it was quite the lively conversation, and the ideas presented here were more concentrated on localization, technology and networking with people going forward. It’s amazing to me to hear a different perspective to the similar questions asked at the Lavacon Adobe Day panel just seven months ago! It does prove to me that adaptability and understanding the bottom line of what content is needed, and how to disseminate content with ever-changing technology is key going forward.

Thanks to all the panel participants for your insights! (Also thanks to Maxwell Hoffman, as I used both my notes and his notes on Twitter to recall this panel discussion.)

To any of the panel participants–if I misquoted or mis-paraphrased you, please feel free to comment below to correct me!

So, this was the closing act of our tech comm “Coachella?” Impressive! Stay tuned to learn more about the main acts of this gig!

5 Responses to If Tech Comm had its own Coachella, how would it be done?