Posted on March 4, 2016 by TechCommGeekMom 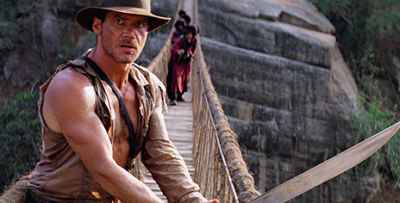 Taking on new contracting positions is always an adventure. Indiana Jones knows all about that!

It’s been a quiet start to 2016 for me, even though there have been some things going on for me “behind the curtain”. I wasn’t ready to share just yet, but I think I am now, since things have settled down for the moment.

My contract as a knowledge management specialist ended early. The projects that they kept saying to me, “They are coming…we’re waiting for approval…” fell through. Two of them. They also didn’t have any other work for me to do, so understandably, they cut the contract short. Unlike some other jobs, I was greatly relieved to be released. I did not feel that this particular position and company was a great fit. Even though I truly tried to give it a chance, I remember not having good feeling about the place from my first day of work there, and my gut instincts were right. It wasn’t a good match in the end, and the fact that they didn’t plan well for my presence there proved that.

In the meantime, I had two events that changed the picture rather quickly.

First, I was invited to be a panelist/presenter for a meeting that combined the Philadelphia Area New Media Association (PANMA) and the STC-Philadelphia Metro Chapter memberships. The meeting was about freelancing and contracting. Each group contributed two speakers, and I was one of the two representing the STC (the other was my friend, David Calloway). I was the last one to present or speak, and to be honest, I came completely unprepared. I thought it’d be a quick introduction thing, and then moderators would ask questions based on our experiences and background. (I guess I’ve been watching too many American political debates lately.) I was glad that I went last of the four presenters. Although the other three presenters covered much of what I would’ve said, I still had a few things to contribute. David and I took the stance of being contractors rather than freelancers. And as you might remember, several months ago I started my own freelancing company, but it hasn’t quite taken off yet.

But I will admit, listening to the others, I had a big realization of my own that night. I’ve been a contractor for several years, but not of my own choosing. I’ve tried finding full-time employee jobs, and it hasn’t happened in years. I think the last time I was not a part-time person or a non-contract person, it was still the 20th century! Yet perhaps, without my knowledge, I’ve already been a freelancer by default of being a long-term contractor.

That was my “A-HA!” moment, as Mitchell Levy likes to call it. I realized that yes, perhaps I have been a freelancer all along, and perhaps it really isn’t so bad to constantly be getting contract jobs. After the meeting, I told my husband about the discussion, and he pointed out that there was great opportunity in being a contractor. The biggest thing he pointed out was that each contracting job was an opportunity to learn new things. I would learn more about different industries, and often I’d learn more about new software, new procedures, and generally pick up a few new skills. I would also learn more about myself, namely what I’m good at, what I’m not as good at, and what I actually like doing.  The more I thought about it, I realized that he was right. These are all opportunities to hone different parts of myself, both in improving what I do well, learning new things, and gaining insight about what is best about my capabilities and how to use them.

Now, not everyone can be a contractor. It’s not easy because of complications of being a non-employee, thus you don’t get the same rights and benefits, like affordable health insurance, as a contractor. Some agencies that contract out do offer these benefits, but they are usually at a higher rate than at a large company. But, at the same time, there are certain flexibilities that a contractor has. If a contractor is careful with personal finances, he/she can take time off, or work more than one position over time. Granted, in 99.99% of cases, if you don’t work, you don’t get paid. So, for example, when I go to the STC Summit in May for about a week, I won’t be paid for “paid vacation”. In fact, a contractor doesn’t get any paid vacation. You get paid for the hours that you work. So, that can be good, and can be bad. If you are a good contractor, you communicate these occasions with your manager, and you ensure that you are caught up with your work to be able to do this, it provides a little flexibility that an employee doesn’t have.

I’ve lamented the woes of being a consultant recently, and it was especially because I was in a bad situation. It was not a good fit, and the worse parts of being a contractor were at their absolute worse. But now that I’ve been away from that, with the help of this PANMA/STC-PMC panel last week, I’m starting to change my attitude a little bit.

With that in mind, I took a new job that started this week…as a contractor. I will be working for a global insurance company as a content writer/copywriter for their global self-service websites. This is a big change for me, because while you’ve known me as a social media writer, I really haven’t done any writing for a company this way before. I originally was reluctant to take the job, as it’s a far commute than what I’m used to and I’m taking a significant pay cut to do this job. But, I saw it as an opportunity to actually put my technical writing, editing, and UI/UX experiences to work in a different way, so it’s worth a try. After all, the contract is only for six months with a possibility for extention. Unlike the last position I took in which I had a sinking feeling about it (and my instincts were right about it), I have a better feeling about this position. After completing my first day, I think it’ll be a challenge to do things from a different perspective, but I liked the group of people I’ll be working with, the environment was more inviting, and I could tell that the work we’d be doing is much more in line with my experiences.  While I’ll be learning to do copywriting the way they want, I’ll still be using skills I’ve acquired from all the conferences, webinars, grad school, and social media experiences I’ve had. In other words, I think this is a much better fit, and I think I can learn something positive from this position, which makes me feel much better about taking the position.  Everyone was speaking tech language that I understood, and I was deep in the mix with information architects and visual designers as well as spending a lot of time with the other copywriter on my first day. I think it’s going to be a good thing!

I’ve also been continuing to work on a part-time basis with my old content strategist/management job at BASF. It’s my “moonlighting” job, as I call it, but it helps keep those skills fresh at the same time while working with another company that I truly like. 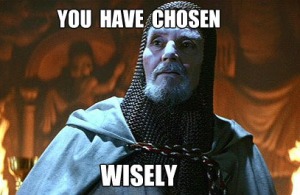 See? Even the old Templar Knight agrees with this attitude change.

These next months are going to be obviously very busy, but I think they’ll provide some good insights into something new for me. I’ll be able to truly write blog posts from a technical writing and UI/UX perspective based on new experiences. Hopefully, future contracting positions will also be providing great learning experiences along the way. Perhaps embracing being a contractor means that I will be more of an adventurer than I thought.

6 Responses to Contracting Adventures Lay Ahead…