Digital Tablets for Kids–Child’s Play, or should we take it seriously?

Posted on September 27, 2012 by TechCommGeekMom 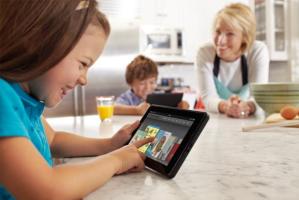 Just within the last month or so, I’ve been made aware of two tablet computers made for especially kids–and ones that weren’t something like a glorified LeapFrog or VTech toy. There is a place for LeapFrog and VTech-type tablets for the preschool/early elementary school set, but the ones I list below were recent ones that I became aware of targeting the grammar school demographic.

The first one I saw was the Tabeo tablet. I read about it in the following CNET article:

The Tabeo, according to the article, is an Android-based tablet that includes drop-safe bumpers, wi-fi, and parental controls, and will only be available through this toy selling-enterprise.

The other kids’ tablet that I came across (and I don’t remember how–perhaps watching TV with TechCommGeekSon?) is called the Meep Tablet, which is being released by Oregon Scientific.

It, too, is a tablet that runs on an Android OS, has drop-safe bumpers, wi-fi, and parental controls, and it appears that it is sold only through Oregon Scientific.

What would be appealing about these tablets, which are targeted for the ages 6 and up crowd? Part of the appeal would be the price– about $150 for either tablet. Yes, the parental controls and such are nice features–no denying that, but what else? Neither item has much memory, and if kids are going to use these tablets for games, then they need a lot more memory than what a first generation iPhone had. While memory cards can be added, why go to those lengths? Why not just put decent memory chips in the devices in the first place?

Being that I’m an m-learning TechCommGeekMom, I also tried to think about how such devices would be good at a school setting. Could they be used in a school setting? I suppose they could be on some level, and it’d be a decent investment for a school at just $150 a pop. Schools could control the content, using the parental controls. The bumpers used to protect the devices would allow for some longevity for the devices as well. The devices still have video and web cameras, and are still wi-fi enabled. Since they run on a version of Android, they could download Android apps.

But is buying either of these devices worthwhile? Since only the Meep in available now, and the Tabeo is coming out in a few weeks, we’ll have to see what the big reviews say. I wouldn’t mind reviewing them myself if I could get a hold of each of these, so in the meantime, I can only go by what each manufacturer has promoted.

But in thinking about the age group of “6 and up”, and thinking about my own son and how I would want to invest money in a tablet for him (if he wasn’t usually borrowing my iPad), why would I bother to get a kiddie version that’s barely expandable or that could be updated with later software, and had more memory?

My first thoughts turn to the idea of the rumored iPad mini. Oh, if that was out there (and I had the cash), I’d buy that in an instant for my son. Why? Well, first of all, it’s no secret that I LOVE my iPad. I love the variety of apps available–both educational and for games for him. Since he has to use my iTunes account to download apps (and I don’t give him my password), I can supervise what  goes on the device and what doesn’t. That seems like parental control to me. I would be able to use the “Find iPhone” app to track him as well, as needed. It also would much more internal memory, I should think, than what the Meep or Tabeo is offering. Even if it only had a 8GB or 16 GB memory, that’s better than the base memory offering of Meep or Tabeo. Additionally, there are already school programs out there using iPads, so adapting to iPad minis would be an easy transition for many schools, and be easy for kids to use due to its smaller size for smaller hands.

This leads my thought stream into thinking about Nexus 7 tablets, Nook HD tablets, Samsung Galaxy or Kindle Fire HD tablets. Why not get those for a child? They are smaller Android-based tablets as well, right?  Well, the prices tags are a little higher, that’s for sure. In most situations, however, several of these tablets are not THAT much more money, and yet there would be more flexibility in these devices.  I was just even reading a rumor that Microsoft’s Surface tablet may come in a variety that’s in the $200 range. Talk about flexibility compared to some other tablets, even if it’s still more of a PC than a tablet! Why wouldn’t a parent invest in that type of tablet instead, knowing that there are more apps, more downloadable programs, and more memory with these machines?

Business Insider recently posted this article comparing tablets, and it’s worth a read:

The Only 7 Tablets Worth Buying Right Now

Of course, my money is on the hopefully impending iPad mini. But even if that never comes to fruition, these other tablets provide some good bang for your bucks.  I think cheap childproofing bumpers and kid-friendly can be found on eBay and other retailers, if that’s a concern. But I see these other mainstream tablets being a better investment, as they can grow and upgrade with your child better than one “made for children”.

My child is part of the demographic that the child tablets are targeting. He’s now 11, and is a very different child than when he was 7, 8 or 9 years old. His tastes and needs have changed in just a few short years. Heck, he’s even upgraded his Nintendo DS two times in the last three years, because he wanted better memory and flexibility with the DS apps offered, as well as more powerful hardware. He might not put it in those terms, but even he knows the game. (No pun intended there!)  Looking at tablets for growing kids should be looked at the same way–a tablet, for the investment, should be able to grow with the child, and a regular tablet would better suit those needs. With a regular tablet, not only would there be personal flexibility with games and apps, but more opportunities to use it for educational purposes–for homework, classwork, etc.

And that’s TechCommGeekMom’s take on that. If some manufacturer wants to send me one to be put through the TechCommGeekSon wringer, or if someone has had a different experience with a made-for-kids tablet, let me know. I’d be glad to share your experiences in a post here.