Posted on January 2, 2015 by TechCommGeekMom 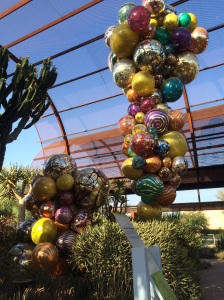 This was part of the Chiluly exhibit that was at the Botanical Gardens while I was at the STC Summit in Phoenix, AZ. It was cool!

As the year 2014 winds down, many have summarized the past year, as a reflection of all that has transpired.  When I started to think about the past year, I wasn’t sure that it was all that great of a year at first, but the more I thought about it, I realized that despite some less than desirable things transpiring towards the end, there were actually a few good things that happened that were worth noting.

1) This was the first year that the number of hits my blog received for the entire year topped over 10,000 hits. It was a goal I had hoped to achieve, and I had to work for it. My stats would falter if I didn’t write an original blog post (like this one), and I think, despite the new achievement, my stats didn’t reflect what I had hoped, but I put that on myself. This was a very busy year, and it was difficult for me to keep up with writing original posts. So despite that, I’m glad that so many people still enjoy the content that I share here, whether it’s original content or shared content. I try my best to share what I find interesting in the hopes that others will find it interesting, too, and perhaps learn from that little piece of information as well.

2) I was able to travel to some new places and do new things. I went to the Intelligent Content Conference in San Jose, CA back in February, and went to the STC Summit in Phoenix in May. Not only did I have an opportunity to enhance my knowledge during these conference through the fantastic learning sessions, I also met a lot of new people. I love that I have some wonderful new professional connections as well as new friends. These conferences also gave me the chance to strengthen professional connections and friendships with technical communicators I met in the year before and the year before that. Becoming more ensconced in the tech comm community has meant a lot to me, and I have appreciated every connection I’ve made or deepened in the last year.

3) My writing opportunities changed. While I was writing mostly for my blog this year, I also wrote for other outlets instead. Some of those opportunities folded or didn’t work out, but other opportunities arose from the ashes, including two top ten articles for Content Rules’ blog, and a new opportunity to write for STC Intercom (which will be seen in the new year). I thank those who helped make those opportunities, and appreciate your faith in my abilities when I’ve sometimes doubted them.

4) I gave more presentations this year. I presented at the STC-PMC Mid-Atlantic Conference, but I also did my first presentation at the STC Summit. I also presented for the first time to a non-tech comm audience at the e-Learning 3.0 Conference at Drexel University this year.  In other words, I pushed myself to do more this year and put myself “out there” more, even though I think there are others who have more to contribute than I do.

5) I had an opportunity to stretch myself professionally at work. I became more confident in my abilities to be a project manager and content strategist working on new websites at work with assignments I was given. I learned a new CMS (Adobe CQ) as a skill I’ll be able to carry with me going forward, and I was chosen to help with the most important part of the company’s new external site–the Careers section. I spread my wings so much in my job this year, and gained myself back in the process. My knowledge and full abilities were suppressed for so many years, that having the chance to truly use them and have people find them to be valuable helped me immensely.

6) In a somewhat unrelated topic, while I stretched my mind, I shrunk my body. To date, I’ve lost about 40 pounds this year. For once, I kept to my new year’s resolution, even if didn’t actually start until May or June! Part of my success was due to the tech comm community. Many have supported me or taken this journey with me. I love that the tech comm community’s reach goes beyond tech comm–and with this support, I know I will be able to continue to lose another 40 (or more) pounds into the next year.

I took a quick look at last year’s year in review, and in some respects, this year’s review isn’t that much different in overview.  What makes this year different was that many of the events were new experiences, new faces came into my life both online and in-person, new relationships were forged, and old relationships became deeper and stronger. Networking connections have become friendships, both professionally and personally. For a person who lives a highly isolated life as I do, this is so incredibly valuable to me.  I’ve always supported social media because it supports connections between people all over the world. Social media keeps me connected to all of you who support me–whether it’s through this blog, or on Facebook or Twitter or Google+ or LinkedIn.

Thank you all for being there for me through the good times and the bad. It’s because of these connections that this upcoming year, which is going to be filled with a lot of changes, that I know I’ll be okay. I have a support system that I didn’t have a few years ago. And hopefully, I’ve been part of others’ support systems as well.  I know that several people were kind enough to reach out to me after my last blog post, and I felt humbled. I also reached out to a few people who were happy to offer help when I asked. I know that as I go forward in the next year, the tech comm community is one that I can easily crowdsource for feedback in my steps forward. My experiences this year reinforced this for me more than ever, and it’s not one I take for granted.