Posted on May 3, 2014 by TechCommGeekMom 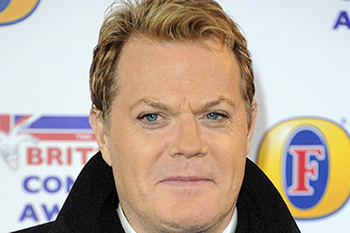 My husband and I had a rare date night last weekend to celebrate our 15th wedding anniversary, and we celebrated by going to Philadelphia to see British comedian Eddie Izzard. I love Eddie Izzard’s style of standup comedy, because he mixes up intellectuality with the absurd, and it works brilliantly. If you don’t believe me, go to YouTube, do a search on him, and watch any of his routines. (Two are at the bottom of this post–read on.)

During the show, he talked about how he’s been learning several languages so he can deliver his routines in several countries. He’s already fluent in English and French, and he recently added German to his list, with Spanish, Russian and Arabic planned for the near future. That’s fairly ambitious for anyone to learn so many languages! However, as he started to use other languages, he’d run into some issue.

He’s retold the story for interviews as well, so here’s how it was described in the Boston Globe, which is better than I could muster:

Performing stand-up in another language isn’t as simple as translating the words. Particular phrases that have certain weight or provoke specific images in English can fall flat in another language. Izzard found this was true in his shows in Berlin. There is a routine in his current show about aging, how when people are young, their bodies are trim and fit, but as adults, “our bodies are like two weasels covered in gravy nailed to the back of a tractor.”

When a joke depends on wordplay like that, it tends to fall flat in translation. When Izzard does a literal German translation of it, his speech is full of spiky consonants. “It took me ages to learn to say that phrase,” he says, “and then I found once I was saying it well, the Germans would just stare at me and go, ‘What?’ There was too much wordplay. So I had to change it to, ‘Our bodies are like two washing machines filled with frogs that have been sat on by elephants.’ ”

Because he had to translate it and make sure it worked, “Force Majeure” is the first of Izzard’s shows to be completely scripted. His brother, linguist Mike Izzard, helped him make the transition into other languages.

He will have no such concerns doing his usual improvising in English. “Certain bits in English I’ve actually sorted out, ‘Well, that actually flows well,’ ” he says. ‘Whereas some bits are designed to be extemporized each night, to be improvised each night.”

What does this have to do with content strategy? It’s a huge part of it–TRANSLATION AND LOCALIZATION. Izzard found that merely translating his material wasn’t enough. It would lose its meaning and impact if translated word-for-word into German. Even during the show I was at, I heard him correcting himself a few times by catching himself using British terminology and switching it to American terminology for better understanding. As the Boston Globe article said, in order to make sure that the show he’s presenting now is fairly standardized, he had to come up with a strategy–in this case, a full script rather than only a mental outline of topics to cover in order to make the content consistent, thus making it easier to translate. By writing a script, he’s single-sourcing his content so his audiences can have a singular experience. But in translation, he realized that localization is a big part of it, whether it’s changing from British phraseology to American phraseology, or changing the story a little so it fits better in the language, as he had to do for German in the example above.

The view from our seats at the Forrest Theater in Philadelphia, PA, 3 May 2014.

As we develop our own content strategy, translation and localization need to be a big consideration, even if you don’t think it will be a concern. It can have a big impact on your message, as Eddie Izzard discovered.

And if you don’t know understand this yet, I think we’ll have to get Mr. Stevens to straighten things out. PANG! See these Izzard videos to understand the power of Mr. Stevens.–see part one and part two. (Note: NSFW language used, but pretty funny. He did a different variation of the Mr. Stevens song for us to the tune of “America the Beautiful,” which I liked better than the version presented here in part two. Localization for the city where the US declared its independence. 😉 )

Danielle M. Villegas is a technical communicator who has recently started her own technical communications consultancy, Dair Communications. She has worked at the International Refugee Committee, MetLife, Novo Nordisk, BASF North America, Merck, and Deloitte, with a background in content strategy, web content management, social media, project management, e-learning, and client services. Danielle is best known in the technical communications world for her blog, TechCommGeekMom.com, which has continued to flourish since it was launched during her graduate studies at NJIT in 2012. She has presented webinars and seminars for Adobe, the Society for Technical Communication (STC), the IEEE ProComm, TCUK (ISTC) and at Drexel University’s eLearning Conference. She has written articles for the STC Intercom, STC Notebook, the Content Rules blog, and The Content Wrangler as well. You can learn more about Danielle on LinkedIn at www.linkedin.com/in/daniellemvillegas, on Twitter @techcommgeekmom, or through her blog.
View all posts by TechCommGeekMom →
This entry was posted in Uncategorized and tagged comedy, content strategy, Eddie Izzard, Force Majeure, localization, Philadelphia, single sourcing, singular experience, social media, tech comm, TechCommGeekMom, Technical communication, technical communications, technical writing, translation, video. Bookmark the permalink.