I first heard about the Khan Academy from my husband. My son, who is a high-functioning autistic, had fallen behind in his math skills because of problems with his classroom teacher (that’s a long story, I won’t get into it). Needless to say, a kid who had been doing fine in standard third grade math was still doing third grade math, and we were trying to find solutions to figure out how we could get him to catch up in a way that might interest him. My husband, in his quest to find something online, had found the Khan Academy, and had explained to me the history of the site. It sounded like a great idea, so I took a look at a couple videos on some of the simpler math concepts. It was great! I mean, what’s not to like, and why didn’t I come up with this idea myself? I liked the concept of what Salman Khan was doing, and it was easy to follow, and interesting to watch. While we didn’t introduce it to my son as we got sidetracked with other things (again, long story), I never forgot what the Khan Academy was about, and hoped that it would do very well in years to come.

Well, much to my happy surprise, it’s caught on like wildfire. It’s actually built up to a little business, and is now a leading standard in reverse classroom or “flipping the classroom” techniques. What’s the reverse classroom, or how do you flip a classroom, you may ask? (It’s okay– I didn’t know until about a week ago or so myself.) This concept is where at night, student would study and learn the new concept, and then do the homework at school. The idea is that kids would learn a new concept on their own, and then use class time for putting what they learned on their own the night before into practice with exercises, and the teacher would spend the time helping reinforce the ideas and helping to clarify what wasn’t clear. When I read what the idea of the reverse classroom was, I thought, “Brilliant! Why didn’t they do that when I was a kid in school?” I can see a lot of subjects where that would come in handy, and to hear that Khan Academy was one of the leading online resources for such learning, my main thought was how cool that had to be, and how much more fun learning would be. (Yes, even for those subjects you hated.) The CBS program, “60 Minutes” even just did a piece on Salman Khan and Khan Academy, which you can see here.

Now, like the “genius” character from Star Trek who appeared and then reappeared for a movie of epic proportions, Sal is back with a new way to distribute Khan Academy information, namely with a newly minted iPad app. It seems only natural that something like this had to be next, especially in light of the mobile learning movement that’s starting to take hold. I downloaded the app, and figured that I would review it here for you.

I looked at two courses within the program. It appears that all the content– and then some, that’s currently available on the Khan Academy website is available through the app. Now, I started tonight to keep track of what I looked at, and logged into the site. Login is either through Google (which makes sense, since Google is one of Khan Academy’s benefactors) or through Facebook. I chose to sign in through my Facebook account, and it only took basic information, nothing more, which is good. (I wish more apps that you sign into from a social media site only did that!) Anyway, the design was slick and simple. In landscape mode on my iPad, videos were listed on the left from a menu, and the video was found at the right. One feature on the iPad, you will notice in the screenshot image I have below, is that there is also a transcript of what Sal is saying in the video. I suppose this is good if you speak English but are not a native speaker, and you want to understand what he’s saying. (He speaks clearly for native English speaker, just so you know.) It also helps as a table of contents of sorts, so you can always say, “Oh, at this timestamp…” or “When he said….”, a person can find it within the video.  I found that at first, the scrolling of the transcript wasn’t working too great, but the longer I left it going through the lesson, it eventually synched up.

One of the neat features that I didn’t realize right off the bat, was that the video is not limited to the small screen seen above in the main interface– although what’s there is still clear. With the swish of multiple fingers, the video can expand to full screen like below: 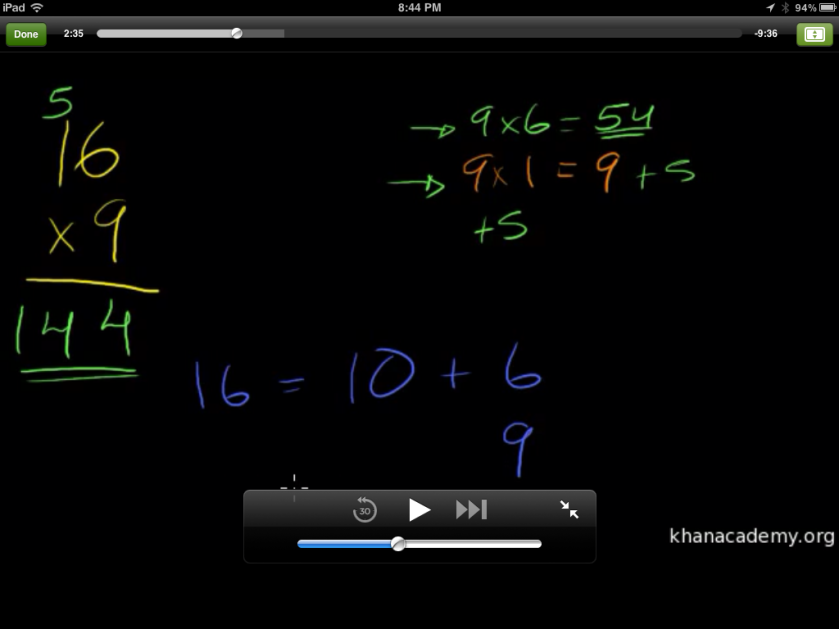 I was glad of this feature, not only because that way, the learner can see things better, but with the full-size, larger interface, it gives the experience a homier feeling, like someone sitting down next to you with a set of colored markers and paper (albeit black paper, but hey, I’m fine with that.)

I looked at the display through a portrait view, and it looked like this:

(Sorry it’s a little smaller– the larger size image was TOO big.) You can see that the menu list is gone, but the video screen and transcript are still in place. When expanding the video in portrait format, it looks like this:

It’s still legible, and clear, and has that same comfort level as when it was in landscape mode. The screens adjust quickly between the landscape and portrait modes, which is good.

I won’t review the videos, as that’s been done before. I took this multiplication course, as it’s information that I’ve been reviewing with my son, but I also took a history lesson on Allende and Pinochet in Chile, and I thought it was well done. Sal does not show any bias towards one or the other, but does a pretty good job of presenting the facts, and actually invites the learners to draw their own conclusions, ask their own questions about the historical information. That is real teaching, my friend. A true authority will never admit to knowing it all, but will admit to being incredibly well informed, and always willing to invite curiosity, which is what Sal is doing here. He really does an excellent job.

Now, you may ask, what does this have to do with mobile learning? LOTS. Khan Academy is a rising star in e-learning right now, and by creating an app for iPad makes the courses even more accessible than ever. And just to play devil’s advocate, I accessed the Khan Academy through my iPhone’s Safari browser, just to see if everything would be teeny weeny and a waste of my time, but since all the videos are saved on YouTube, it’s very accessible. In fact, on the Safari browser, the site switched to a mobile browser version of the site, provided the same main menu of topics and videos, and upon choosing the video I wanted, I could still view the same videos pretty clearly. So even if a student didn’t have an  iPad or computer at home, if they or one of their parents had a smartphone, they could still access the information fairly easily.

So, is there a wrath of Khan? Not really. The only wrath that Salman Khan might have is what motivated him to start his non-profit academy in the first place– a passion to be able to provide basic (and not so basic) educational information to masses of learners all over the world by an easy means of communication at an affordable rate. (Who can’t afford free? Only cost is the computing device used, and many have access or have one.)

And isn’t that what mobile learning is supposed to be about? Easy access to easy to understand education information? I encourage anyone reading this to look into the Khan Academy. The firm is full of movers and shakers in the e-learning world that are dedicated to a higher purpose. It’s the kind of firm I would LOVE to work for, if given the opportunity. (Sal, call me!)