Tech Comm and The State of Urbanization 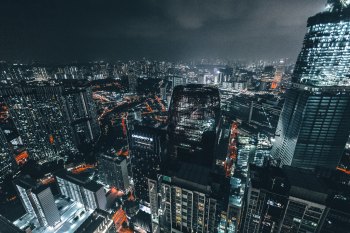 This is how I view many cities.
Is this really where all the tech comm work is?
Photo by Lee Aik Soon on Unsplash

Being that I’m a person whose career is always seemingly in flux, I was listening to a past webinar that featured a few people I knew who were giving advice on how to stay current within the tech comm profession.  While I found there were a few tips in there that were useful, I found that many of them were things that were things I had already tried, but hadn’t found true.  Or, I’ve been doing them all along, and I’m not as far into my career as I want to be.

I’m sure after reading a lot of my posts about remote work, people obviously know what a big proponent I am of remote work–especially in the tech comm field.  But I started thinking about additional aspects of it, and why it’s important that we try to keep working towards remote opportunities being available in this day and age: urbanization.

Now, just so you know, I’m currently contracted at a company–remotely–that has a vested interest in urbanization. One hundred and fifty years ago, people swarmed to the cities to find jobs–industrial jobs in factories, mostly–to support themselves and their families. Once the industrialization craze calmed down, as housing and cost-of-living costs went up in the cities, the move towards more suburban areas started.  People could live outside the cities and still have really good jobs, or they lived in close enough proximity to get to a city without the hassles of city life. It was a winning situation.  I’m finding that now, that is changing back to the industrial revolution thinking again, except there are differences this time.

This time, we are driven by the digital revolution–not the dot-com industry, exactly, but all the digital companies that run throughout the internet that provide information, development, and other resources in our lives.  This sounds like it’d be a tech comm paradise–and it could be–if it wasn’t for one thing. Many of the opportunities are in the cities. Millennial are willingly flocking to the cities to hopefully provide manpower needed, but even they can have issues with living in the cities simply because of one thing: cost.  I know I’ve read where you can’t even afford to live in the San Francisco Bay Area/Silicon Valley, even on the generous paychecks they dole out there, even if you live hours away.  I think I just heard or read the other day that millennials are the first generation that won’t be able to buy cars or homes easily after a couple of years of working out of college.  Baby boomers could because the cost of college, housing, and other “normal” living arrangements were still easily attainable. With each generation, it gets harder, and even if you are a Gen-Xer like myself, it doesn’t mean it’s easier necessarily.

I can’t speak for everyone, but as for myself, I find it very difficult to think that the only way for technical communicators to get jobs is to uproot themselves–and in some cases, entire families–for jobs in the cities, and that includes contract jobs.  It’s bad enough that tech comm struggles to prove to industries that it has permanent value, and that technical communicators are not engineers, scientists, pharmacologists, executive MBAs, or computer programmers/developers who can write. The industry expectation is that you are one of those things, and you can write, instead of the other way around–a writer who can learn terminology and research, and can turn techno-babble into clear language for everyone else. That’s already a battle. But to say that those who do value tech comm are only found in the cities? That’s horrible.

Photo by Annie Spratt on Unsplash

Why is being in the city so important in the digital age? Is it because that’s where the financing is found? Is it because of corporate offices being in a city? I’m sure it’s yes, on both accounts.  But when you really stop and think about it–why, in this digital age, are we having another flocking to urban areas? This doesn’t make sense to me.  I think about where I live in Central New Jersey.  When I was getting out of college, this area was the hot spot if you wanted to find a job. I moved from my parents’ house to the town I live in now to be closer to Princeton. Now…unless you are in finance, pharmaceuticals, or are an ace web programmer/developer (none of which are me), there’s nothing. All the appropriate jobs in are either in New York City or Philadelphia, both of which are at least an hour and a half commute in each direction. That would be three to four hours out of my day. Now, not to sound old, but that’s WAY too much of my time that could be my own. Taking public transportation doesn’t make it any better, really. It makes it more of a hassle, and still doesn’t allow me to own my time.  I know people who do it, and I think they are crazy.

There are a LOT of talented people around the world. A lot of smart people around the world.  I know technical communicators who, like myself, are at a loss as to what to do, because either they already live in a city and struggle to afford it, or like me, struggle to find something that’s either remote, or nearby so they can have a good quality of living for themselves and/or their family.  Why should we sacrifice so much? It’s bad enough that the jobs are in the cities, but if the cost of living in those cities is making working at those jobs unattainable, isn’t the solution for companies to start either moving to the suburbs OR figuring out ways to encourage remote working? Perhaps that’s too logical.

The re-urbanization of society is not necessarily a good thing, especially considering this is the digital age, where we can put up hotspots and satellites and wi-fi towers anywhere we want within reason.  Why aren’t companies taking advantage of this technology? If they like to think of themselves as global and inclusive, why are they limiting that global access and inclusivity only to their urban work sites?

As technical communicators, it should be a big part of our initiative to promote ourselves not only as people who add value to a company’s bottom line through documentation, UX, content strategy, and other skills we have, but that we are also able to work just about anywhere–including in our home offices–and still be effective at what we do. We can help our local economies by staying put and not contribute to the overcrowded cities and the rising costs there.  Why would I want to try to get a studio apartment in San Francisco or Silicon Valley or New York City for USD$1-2 million when I can get a three-to-four bedroom house in a nice neighborhood, have some green space/a garden, a good school district for my child, for a fraction of that? Why should I have to sacrifice my time with my family and other obligations I have to my community by commuting four hours round trip everyday, and sacrificing my physical and mental well-being at the same time?  Urbanization is not a solution, it’s more of a problem. Digitization should be allowing for more widespread resources, not confining them to one area that everyone must flock to.

Danielle M. Villegas is a technical communicator who currently consults for Cox Automotive, Inc., and freelances as her own technical communications consultancy, Dair Communications. She has worked at the International Refugee Committee, MetLife, Novo Nordisk, BASF North America, Merck, and Deloitte, with a background in content strategy, web content management, social media, project management, e-learning, and client services. Danielle is best known in the technical communications world for her blog, TechCommGeekMom.com, which has continued to flourish since it was launched during her graduate studies at NJIT in 2012. She has presented webinars and seminars for Adobe, the Society for Technical Communication (STC), the IEEE ProComm, TCUK (ISTC) and at Drexel University’s eLearning Conference. She has written articles for the STC Intercom, STC Notebook, the Content Rules blog, and The Content Wrangler as well. She is very active in the STC, as a former chapter president for the STC-Philadelphia Metro Chapter, and is currently serving on three STC Board committees. You can learn more about Danielle on LinkedIn at www.linkedin.com/in/daniellemvillegas, on Twitter @techcommgeekmom, or through her blog.
View all posts by TechCommGeekMom →
This entry was posted in Uncategorized and tagged baby boomers, content strategy, digital literacy, digital revolution, digital urbanization, digital work, digitization, Gen X, millennials, remote opportunities, remote work, remote working, tech comm, TechCommGeekMom, Technical communication, technical communications, technical writing, urbanization, value, value of remote working, value of technical communication, working in cities. Bookmark the permalink.

4 Responses to Tech Comm and The State of Urbanization