Douglas Adams Knew Tech Comm Before It Was Cool 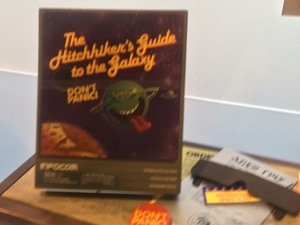 Photo taken at the Computer History Museum in California by me! Who knew it’d be back in the news?

At the end of my trip attending the Intelligent Content Conference in San Jose, California, I had the opportunity to visit the Computer History Museum in nearby Mountain View with a group of other conference attendees. It was a great little excursion, especially for a geek mom like me. Every kind of computing device in the last 150 years (give or take) was included in this place. I felt particularly old when seeing several of the first computing toys like “Merlin”, “Donkey Kong”, and “Quiz Wiz” displayed (I had one of them, my sister had another, and I wanted the third!) I also saw some of the earliest versions of Apple and PC computers. I remember them as well. My father brought home an Apple II from the school where he was an administrator, and I remember playing some of the earliest versions of Castle Wolfenstein and doing simple computer graphics in BASIC on it. Good times. 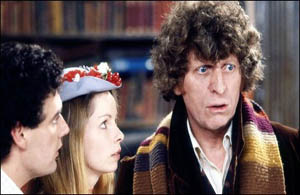 Tom Baker as the 4th Doctor on Doctor Who. He later starred in Adams’ “Hyperland” video as the interface.

But one items caught my eye, which was the game shown in the image above. It was the computer game of “The Hitchhiker’s Guide to the Galaxy” from 1984. My own disclaimer is that I’ve never read the book or played the game, but I’ve watched the movie and enjoyed it. I also know that the author of the book, Douglas Adams, was an occasional writer for Doctor Who for a time, so seeing this computer game picqued my interest. I also remembered that Douglas Adams wrote and created the mini-movie called, “Hyperland”, which starred the former Fourth Doctor, Tom Baker, and talked all about hypertext theory. See my post about it here. If you haven’t watched it, you must take the time to do so, as it still stands the test of time and is well done! It occured to me that Douglas Adams really understood the idea of hypertext when he wrote “Hyperland” due in part to Doctor Who, simply because the entire show is actually all HYPERTEXT. While it seems that we are going forward in a linear way, we are actually pulled back and forth into different times and sequences–much like hypertext.  Think Elizabeth I references throughout or that the Doctor can be in several places at once–he may be in Victorian England as one version of himself, while in Victorian England as another version in another part of the country on the same day, for all he knows.  Same story of the same man (essentially), but two different directions.

But anyway, I digress. I thought it was really cool to see this old game displayed at the museum, and didn’t think anything more about it until I saw this article come out:

What’s this? Evidently, the BBC is revamping and re-releasing the game as a 30th Anniversary edition. Who knew that an old game written by Douglas Adams, who understood hypertext theory before it was mainstream, would stand the test of time? I’m excited that it’s out, and have played a round already. It’s good fun. Go to the link above for the article, and find the game on the BBC website. It’s a great example of the use of hypertext writing well before people started to understand how to structure content and employ reuse on the Internet. Give it a try. You’ll enjoy it!

Danielle M. Villegas is a technical communicator who has recently started her own technical communications consultancy, Dair Communications. She has worked at the International Refugee Committee, MetLife, Novo Nordisk, BASF North America, Merck, and Deloitte, with a background in content strategy, web content management, social media, project management, e-learning, and client services. Danielle is best known in the technical communications world for her blog, TechCommGeekMom.com, which has continued to flourish since it was launched during her graduate studies at NJIT in 2012. She has presented webinars and seminars for Adobe, the Society for Technical Communication (STC), the IEEE ProComm, TCUK (ISTC) and at Drexel University’s eLearning Conference. She has written articles for the STC Intercom, STC Notebook, the Content Rules blog, and The Content Wrangler as well. You can learn more about Danielle on LinkedIn at www.linkedin.com/in/daniellemvillegas, on Twitter @techcommgeekmom, or through her blog.
View all posts by TechCommGeekMom →
This entry was posted in Uncategorized and tagged BBC, computer games, Computer History Museum, content strategy, digital literacy, Doctor Who, Douglas Adams, Hitchhiker's Guide to the Galaxy, Hyperland, Hypertext, old video games, single sourcing, singular experience, tech comm, TechCommGeekMom, Technical communication, technical communications, technical writing, Tom Baker. Bookmark the permalink.