Move over, Grammar Police. The Digital Literacy Squad is here.

Posted on April 7, 2015 by TechCommGeekMom 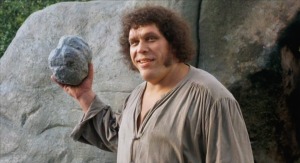 Fezzik says, “Now that my job on the Brute Squad is done, I can help society more on the Digital Literacy Squad. It’s so modern!”

However, I have gotten to a point where I think we need to create a new squad that takes policing to an entirely new level. I propose that we form the Digital Literacy Squad. We are in the 21st century, for goodness’ sake, and I still see content that’s not written in a way that acknowledges that 99.9% of us are digitally literate.

NO! It should be:

See what I did there? I made it a hyperlink. Simple enough, right? People generally understand that something that is a different color from the rest of the text–within context–and/or has an underline under the text is a hyperlink, and that link will take them somewhere else. This is not 1998, where we need to spell it out because the act of hyperlinking is inconsistently reliable. And there is software to help you with those spambots now.

There are some exception, but they are rare. I’m sure someone will post one of those types of exceptions in the comments.  The only one I can think of is something like, “Click on the image below for more details,” if the hyperlink is not obvious to the user, or something along those lines. But in text, it’s usually VERY obvious, and that’s what annoys me.

One might think that this is something that “older” web writers do, but you would be wrong. Just today, I received a content change for a webpage I manage, and this same mistake was sent to me by a millennial. A MILLENNIAL! Someone who has been raised in the digital age and doesn’t know any differently. We are teaching everyone to write incorrectly for the communications and content that we put forth now, and that needs to change.

Just as technology is constantly changing and we need to keep up with it, we need to also keep up with how we create content for the web or other digital devices so that hyperlinking or creating some sort of action is intuitive, and doesn’t need to be spelled out anymore. People are smarter than that now. Internet access has been mainstream for more than 20 years now, and smartphones and tablets are an extension of that. We all know how to use the web, overall, now (yes, there are exceptions, but they are far and few), and we need to write for that, and keep up with those tech changes. With mobile becoming more and more pervasive, this is important because the best use of screen “real estate” is crucial!  Don’t sit back and continue to write as if it’s 1999. It’s 2015 already. Keep up!

This is the kind of content editing I do on a daily basis on my job. It drives me crazy, because often the content is written by great writers who can’t seem to get this concept through their head.

This is such an easy thing to enforce, and it will raise the digital literacy of everyone on the planet.

So who’s with me? Let’s storm the castle!

Danielle M. Villegas is a technical communicator who currently consults for Cox Automotive, Inc., and freelances as her own technical communications consultancy, Dair Communications. She has worked at the International Refugee Committee, MetLife, Novo Nordisk, BASF North America, Merck, and Deloitte, with a background in content strategy, web content management, social media, project management, e-learning, and client services. Danielle is best known in the technical communications world for her blog, TechCommGeekMom.com, which has continued to flourish since it was launched during her graduate studies at NJIT in 2012. She has presented webinars and seminars for Adobe, the Society for Technical Communication (STC), the IEEE ProComm, TCUK (ISTC) and at Drexel University’s eLearning Conference. She has written articles for the STC Intercom, STC Notebook, the Content Rules blog, and The Content Wrangler as well. She is very active in the STC, as a former chapter president for the STC-Philadelphia Metro Chapter, and is currently serving on three STC Board committees. You can learn more about Danielle on LinkedIn at www.linkedin.com/in/daniellemvillegas, on Twitter @techcommgeekmom, or through her blog.
View all posts by TechCommGeekMom →
This entry was posted in Uncategorized and tagged brute squad, content strategy, digital literacy, digital literacy squad, Fezzik, Grammar, grammar police, hints for how to create digitally literate content, hyperlink, hyperlinks, Learning, mobile, Princess Bride, proper way to use hyperlinks in content, social media, tech comm, tech comm software, TechCommGeekMom, Technical communication, technical communications, technical writing. Bookmark the permalink.

2 Responses to Move over, Grammar Police. The Digital Literacy Squad is here.