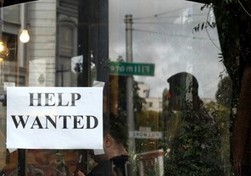 Some 4.7 million Americans have been out of work for at least 27 weeks. And most employers won’t even give them a second look.

Found this through LinkedIn. It’s interesting, because I’ve read something along these lines before, and it’s something that is just…disappointing. And, if you think about it, it’s discrimination. I had one friend who was unemployed for about two years! She had a highly reputable job until her company downsized, and she couldn’t find work due to the economy, meaning that despite how good she is at what she does and how experienced she is, because she commanded a higher salary from all that experience and know-how, they were afraid to pay her top dollar. She made ends meet another way instead–through consulting, which helped her resume in the long run, as at least it showed that she stayed viable during her full-time unemployment run, but it was TOUGH. I experienced the same thing last year. It was part-time jobs that got me through. This is a topic I touched upon in my STC-PMC presentation last month. Lots of talented people are not being given a chance because employers don’t want to be bothered to do a little bit of training to get someone who has the right foundation to get up to speed with "their" system.  It’s a real shame…and by being so discriminatory for something that’s not in a person’s control completely, that just damages the economy–and lives–even more.