Confessions of a first-time graduate instructor

Posted on January 15, 2018 by TechCommGeekMom 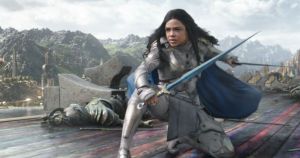 Valkyrie says that teaching is not for the weak. No kidding!

I just finished my first semester teaching a graduate technical communications course. And boy, it was an experience. And crazy me, I signed up for another semester teaching another subject within the program, but it was cancelled due to low registration. What was I thinking?

This first semester, if nothing else, was a learning experience for me. I was never a fantastic student, and while I did really well in graduate school, I expected that anyone who was putting in time as a part-time graduate student while working full-time, and paying a lot of money to do it (yes, even at a state-run university), they would be putting their best foot forward, just like I did. Boy, I was wrong about that.

I will say that there were students who definitely did give it their all, and it showed in their weekly responses and their final projects and papers. They got it. They understood what I was trying to teach. And there were some who struggled, and I really tried to help them in the best way I could if they reached out to me. And then there were those that I could not help, because they chose not to put the effort in the same as their classmates. It was a mixed bag. I suppose I expected it, but in some cases, the resistance I was getting was more than I expected.

So, there was definitely a learning curve for me as well. Do I feel like the semester was a success? Yes and no. Let me start with why I thought it wasn’t, and what I learned.

I started at a disadvantage, as I had only been given the course about 5 days before it started. I had no confirmation that I was definitely teaching the course until I was signing the paperwork to be employed by the university five days before classes started. I knew I wanted to follow a similar curriculum to what I had for the same class several years before, but that was hard to develop quickly. I had to research and update the resource materials quickly, and it wasn’t a quick process. In most instances, I wasn’t that much farther ahead of the students than where they were in the class, so that was added pressure for me.

One of my objectives was to keep the class a little lighter by providing professional articles more often than academic articles. While I know this is the kind of course that should still prepare students who would go on to PhD work, most of the students most likely won’t be going to doing doctoral studies, so I wanted to provide as much practical information for the “theories” part of the class, and get the students talking among themselves to discuss issues. Compared to the work I was given, I gave them less, and I tried to give “heads-up” when big projects were going to be assigned and tried to give as much time as I could for them to do it.

One of the things I discovered was that I needed to be much more specific on my expectations. Because time was a factor in trying to whip up a curriculum and get pertinent readings found and posted, I didn’t come up with rubrics for which I’d based grading some of the bigger projects. While I thought that I was fairly clear with my instructions, it wasn’t surprising if some students clearly missed the mark. Sometimes that was on me, and I own that. But often, if they asked questions, and if I heard the question more than once or even when it was pointed out that I wasn’t clear, I would clarify for the entire class, and I’d still not get what was expected in some instances. It frustrated me to no end.

Part of that clarification was that I wanted the students to put themselves into their work–I wanted to hear their voices, not a neutral voice. This wasn’t meant to be a PR course, and it was important to me that for a social media class, they needed to employ social media by posting on various outlets and revealing something of themselves. I didn’t want their blogs to be news feeds, but rather something that provided at least some sort of personal reflection on the topic. Even when speaking neutrally, there’s a way to do it, and fortunately, some of my students understood it. I didn’t understand students who didn’t want to cooperate with instructions that asked for them to put that little bit of their voice in their blogs and their projects, again, since this was a social media class. I think I needed to be more up front about that, clarify where I was coming from so they had a better understanding of what I expected. Much of social media is about having an opinion. Even clicking on “like” is having an opinion, or supporting an internet article because of A, B, and C. You see that on this blog all the time. I didn’t expect them to bare their souls (unless they wanted to) like I do, but I wanted them to express a point of view. I evidently didn’t stress this enough, even though we spent weeks talking about personal branding through social media.

I tried my best to be fair at all turns, but sometimes it was difficult. I think better planning and better clarification of my expectations through clearer instructions and rubrics would’ve helped.

What went right? The parts that went right are the parts that let me know that I wasn’t a total failure. I got notes from a few students that they said they liked my class, and that it sparked an interest in social media with a new view they didn’t have before. Students said they appreciated me taking the time to answer questions or give them encouragement and support. Students also said that this class made them want to continue with the projects started and see it through further, and they felt they were better prepared going forward with a new viewpoint. Many of my students were total cynics and down on social media when they started, but I think I helped them look at social media in a positive way where they could be empowered to change it for the better. One student even told me that they were so inspired with one week’s topics that they want to study it for a PhD thesis (and this was a student who was originally talking about dropping out of grad school, and I gave some advice about how to keep going). Getting the positive feedback helped me get through the days that I doubted that the lessons I had learned over the past few years and my overall positive outlook of social media being a force for good if used correctly were ones that could be transferred. I had students who took that knowledge, and took it to the next level, much to my relief.

Will I teach again? Time will tell. As I mentioned at the outset of this post, I was supposed to teach a new class that was a combination of foundational web design and foundational instructional design, but it was cancelled due to low registration. I was a little disappointed, as it would have been an interesting challenge for me to do it. My supervisor was generally happy with my performance this past semester with the social media class (or so he told me), and assured me that when these classes become available again, that he’d have me do them. For now, it’s a little bit of a relief, since I’ve started a new job that’s starting to take off a bit, still juggling a second long-term freelance job, and I’m doing a lot for the STC-PMC right now. Getting something off my list was actually good timing, and I have some personal time back to resume some other projects.

But given the opportunity, most likely, I would take it on, time permitting. I am a teacher’s daughter, so teaching runs through my veins. I remember even having a conversation with my father when I questioned whether I was handling things correctly with students, and his 40-year career validated that yes, I was doing fine.  I do like helping people learn, and that’s also why I’m a technical communicator. Even if you aren’t into instructional design, that’s really what technical communication is all about.

What do you think? Would you take on teaching a graduate level tech comm course? Include your comments below.