The most popular second language in each country – INSIDER 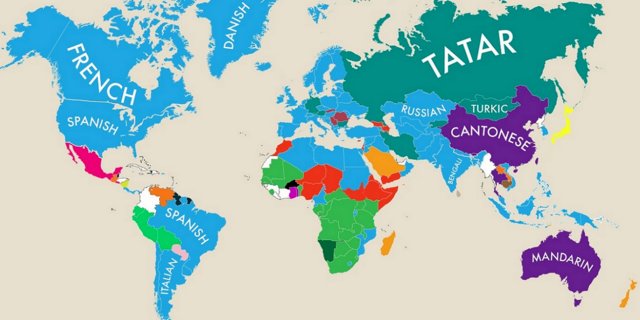 These maps demonstrate how colonization and imperialism shaped cultural identity.

Source: The most popular second language in each country – INSIDER

One of the things that I know is often discussed is the use of languages around the world, and the American preconception that English is the predominant language of the internet because many speak it as a second language.  While the studies continues to change, here’s the latest one to show what the most common second languages are around the world. Fascinating article and images to view! As the subtitle suggests, some of the second languages are not a surprise if you know a country’s former colonial or imperial history. Some just make sense, like Brazil’s second language is Spanish, but that’s mostly because it’s surrounded by countries whose primary language is Spanish.

Take a look and see.  It’s not so neatly organized, as you’d think.

What do you think? Is this another argument for standardized language when writing documentation? Include your comments below.

Danielle M. Villegas is a technical communicator who has recently started her own technical communications consultancy, Dair Communications. She has worked at the International Refugee Committee, MetLife, Novo Nordisk, BASF North America, Merck, and Deloitte, with a background in content strategy, web content management, social media, project management, e-learning, and client services. Danielle is best known in the technical communications world for her blog, TechCommGeekMom.com, which has continued to flourish since it was launched during her graduate studies at NJIT in 2012. She has presented webinars and seminars for Adobe, the Society for Technical Communication (STC), the IEEE ProComm, TCUK (ISTC) and at Drexel University’s eLearning Conference. She has written articles for the STC Intercom, STC Notebook, the Content Rules blog, and The Content Wrangler as well. You can learn more about Danielle on LinkedIn at www.linkedin.com/in/daniellemvillegas, on Twitter @techcommgeekmom, or through her blog.
View all posts by TechCommGeekMom →
This entry was posted in Uncategorized. Bookmark the permalink.