The Secret Shame of an Unacquired Tech Worker

Posted on April 9, 2014 by TechCommGeekMom 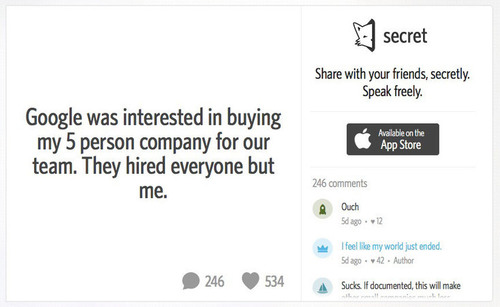 An interview with Amy, a female employee who was left out of her start-up’s acquisition by Google.

This is a really interesting article that I found by way of my fellow Stuart alumna, Caroline McCarthy (@caro) on Twitter.

Caroline and I, while we are about a generation apart, grew up with the same principles that our all-girl school provided, which was that as far as the workplace was concerned, females could do anything males could do–and sometimes better.

Considering that the issue of equal pay for equal work is still an issue in this day and age, and recently has been back in the news that this is still an ongoing issue, this article brings to light that this is a big problem in IT/tech. I’ve been told by some that this is less of an issue in tech comm, but those were usually men who told me that, so I’m not so sure.

Even so, this article brings up an important point, that gender discrimination is still prevalent in the tech world, and it needs to be strongly addressed, whether it be related to pay or opportunity.